My own association with the writings of Rajiv Malhotra began in the latter part of the year 2011, which led me to read ‘Being Different An Indian Challenge to Western Universalism’ a number of times. With my background of deep association with the life-work and writings of Pandit Sriram Sharma Acharya, who was Gurudev to me after I met him in March 1979, my fascination for the writings of Rajiv ji, led me to undertake the task of summarizing ‘Being Different’ for the facility of field activists who would need a “Handbook of Being Different”, for easy reference (which is this E-book). I was also keen that a Hindi version of the E-book was essential to take its message to the Hindi heartland, which in turn led me to be part of a translation project for its Hindi version “Vibhinnata”. It was essential too, that a summarized version of “Vibhinnata” under the title “Vibhinnata Laghu Sanskaran” should be readied as early as possible, for the facility of field activists of the Hindi heartland. The E-book “Vibhinnata Laghu Sanskaran” is a direct Hindi translation of the “Handbook of Being Different” in English and not a direct summary of “Vibhinnata”.

My son Lalit has been my main technical support in preparing these E-books. “Vibhinnata Laghu Sanskaran” only, as an E-book, was uploaded on to the REACHA website on 15th August, 2014 by my younger son, Nikhil.

Reading the two versions, one in Hindi and the other in English, would be very helpful in fully appreciating the profound and subtle thesis presented by Rajiv Malhotra, in his seminal work under the title of “Being Different”, which was published in 2011. 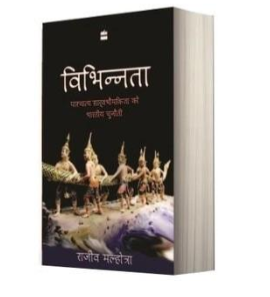 About the Translator of the Summary of "Being Different" by Rajiv Malhotra:

J. C. Pant was born on 4th December, 1937 in an orthodox hill Brahmin family in Almora, an important cultural centre and now a district headquarters and once upon a time, capital of Kumaon. He had his early schooling in Mussoorie, another hill station of the erstwhile Uttar Pradesh and now Uttarakhand, and later proceeded to Allahabad University for his BSc and MSc degree education passing out from the then ‘Oxford of the East’, as this university was till then reputed, in 1958. In his youth Pant was an avid trekker and mountaineer who trekked and climbed mountains in nearly all the Himalayan regions as well as in the Nilgiris and the Western Ghats. He joined IAS in the UP cadre in June, 1961 and served in many important positions in Uttar Pradesh state government as Secretary and Principal Secretary to the state government of UP. Later in 1990 he joined Government of India, initially as Additional Secretary and later as Special Secretary and Secretary in the Department of Agriculture and Co-operation (DAC) and still later as Secretary in the Ministry of Health and Family Welfare from where he retired on 31st December, 1996.